Officially the Municipality of Naujan, is a 1st class municipality in the province of Oriental Mindoro, Philippines. According to the 2015 census, it has a population of 102,998 people.

It assumed the status of a full-fledged municipality on January 4, 1905 under Act 1280. Its boundaries were permanently established in 1919.

It covers a land area of 50,310 hectares (124,300 acres), making it the largest municipality in the province and accounting for 12% of the province’s total land area. Naujan is 26 kilometers (16 mi) from Calapan.

Naujan is politically subdivided into 72 barangays.

The town of Naujan was established in 1639 under a Royal decree issued by King Phillip of Spain. Prior to the arrival of the Spaniards, traces of an earlier civilization existed, as evidenced by the unearthed artifacts of Chinese origin dating from the Sung, Yuan, and the Ming dynasties in barangays of Dao and San Jose. This reinforces the theory that the natives of Naujan were the Chinese during those early years. Its name according to legend, came from the word, “nauhaw”, or “went thirsty”.

Still, the Mangyans that are of malayan descent are known to be the first inhabitants and were just pushed to the interior mountanous area due to the arrival of Christian settlers. They currently reside in the reservation areas of Barangays Metolza, Caburo, Balite, Paitan, Magtibay and Banuton.

In the 17th century, a Recollect priest built a church in Barrio Bancuro with walls made of stone. This served as the house of worship and at the same time as a fort and a place of refuge against the Moro invaders. However in 1824, the Moros were able to conquer them and burned the fort.

In 1898, the Moro raids ceased and the settlement was transferred to Matandang Naujan commonly known as Lumangbayan along the seacoast. At that time, the rebellion against Spanish rule started to break out in Mindoro.

Naujan has its on share of revolutionaries. Francisco Manalaysay had his own insurrectionary forces against the Spaniards. Captain Valeriano Gasic was then the Presidente del Municipal of Naujan. He went underground when the Americans started to rule Mindoro and declared him “tulisan”. He was eventually captured and was sentenced to life imprisonment. This was later commuted to five years in exile in the island of Culion, Palawan where he died

The guerilla movement against the Japanese Occupation was headed by Esteban Beloncio, Felix Boquio and Gomersindo Dela Torre. During the Martial Law years, Father Ed Dela Torre was the prominent son of Naujan who actively fought the dictatorship.

On January 4, 1905, under Act 1280, Naujan was recognized as a full-pledged municipality while it boundaries were permanently established in 1919.

Arambyaw Falls is a series of waterfalls in between two limestone walls. The water comes from a crack on the wall of Mt. Halcon, cascades into four water basins, and flows out to a river. The upper water basins can only be reached by rock climbing. If you don't have rock climbing equipment, however, you may still view the series of waterfalls from the bamboo bridge crossing the two limestone walls. About three stories high, the bamboo bridge can be accessed through a steep trail for a five-minute trek behind the collapsing cottage. Crossing the bridge and trekking further up the mountain leads to a Mangyan village. Before reaching Arambyaw Falls, you would have to travel on a rocky and dusty road through a calamansi orchard, with views of the treacherous Mt. Halcon. 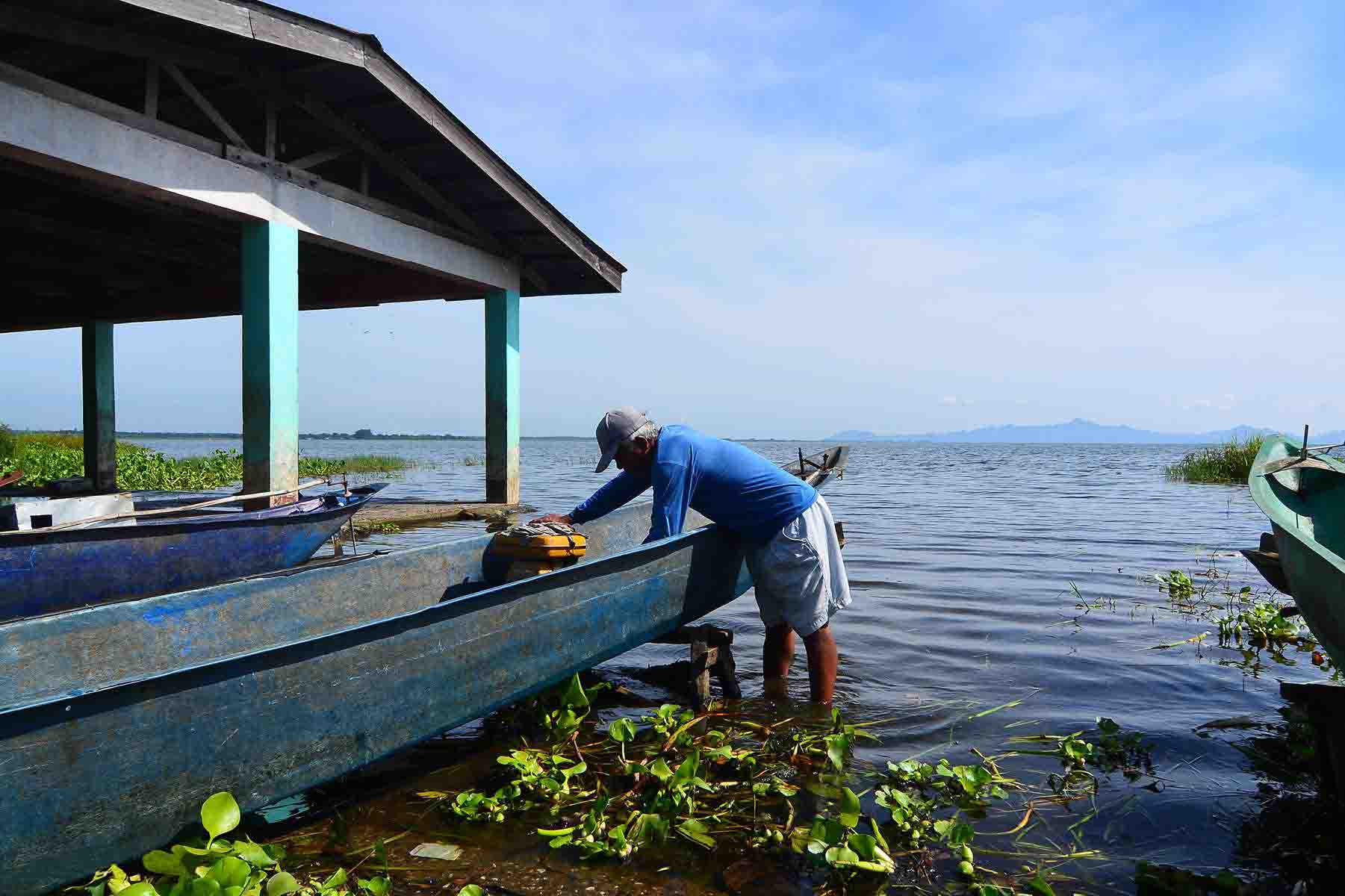 Naujan Lake, the fifth largest lake in the Philippines, is a sanctuary to Oriental Mindoro's rare fish species, and is a source of livelihood to fishermen in the surrounding towns, including Socorro, Victoria, Naujan, and Pola. Some of the catch harvested here are ayungin (silver perch), dalag (mudfish), bangus (milkfish), biya (goby), hito (catfish), managat (red snapper), tilapia, simbad, tarpa, paros, shrimps, and clams.

Also known as "Bancuro Church Ruins", Simbahang Bato is Naujan's oldest church. The church ruins are made of adobe and corals, and have pockets on the walls displaying Christian icons. The ruins were renovated in 2011, and now houses a native-designed church inside its walls. The original church was built in the 17th century by Augustinian friars. Prior this, the friars settled in Barangay Bancuro to convert the residents of Naujan into Christianity. Once built, the church served as a place of worship and a refuge from Moro invaders. In 1824, however, Moro pirates burned the church to rubble, after not finding the church's golden bell. Though the church had not been reconstructed since then, its appeal still remains through its elusive symbols, the quiet corals on the walls, and the adobe structure creeping with vines.

Dabalistihit Festival featurizes different fresh water species found in Naujan Lake thru props and costumes in a street dance. DaBaLisTiHit is an acronym meaning DA for dalag; BA for banak ; LIS for banglis ; TI for tilapia; and HIT for hito. For the constituents of Naujan, DaBaLISTiHit will also personify their struggle of recognizing of the importance of Naujan Lake. This will also dramatize the dignity of the fisherfolks and their role in the economic development of the municipality.