Officially the Municipality of Mansalay, is a 2nd class municipality in the province of Oriental Mindoro, Philippines. According to the 2015 census, it has a population of 54,533 people.

This town is notable for its indigenous Mangyan population. The municipal hall is located on the upper land of Mansalay Town proper, in front of a Medical Care Hospital. Nearby is the church and the only Catholic School, Mansalay Catholic High School. Sta. Catalina is the town's patron saint.

The town also has a wide ammonite formation area discovered in the 1940s. Since then, thousands of ammonite fossils have been discovered. Due to the complexity and vastness of the collection found in the area, the town has been called the Ammonite Capital of the Philippines. Various local and international scientific institutions have conducted research on the ammonite formations of Mansalay. Scholars have argued that due to the natural significance of the area to Southeast Asian pre-history, the site has a big chance of being declared as a UNESCO World Heritage Site or a UNESCO Geopark Reserve. It is 144 kilometers (89 mi) from Calapan.

Mansalay is politically subdivided into 17 barangays.

Mansalay was formerly a barrio of Mangarin during Spanish times. Its name was derived from the Mangyan words un man malay which means “I don’t know.” In 1905, it was consolidated with Bulalacao, Caluya, Managarin and Tikling with the seat in Bulalacao. Mansalay became a separate municipality during the term of Cong. Mariano P. Leuterio. 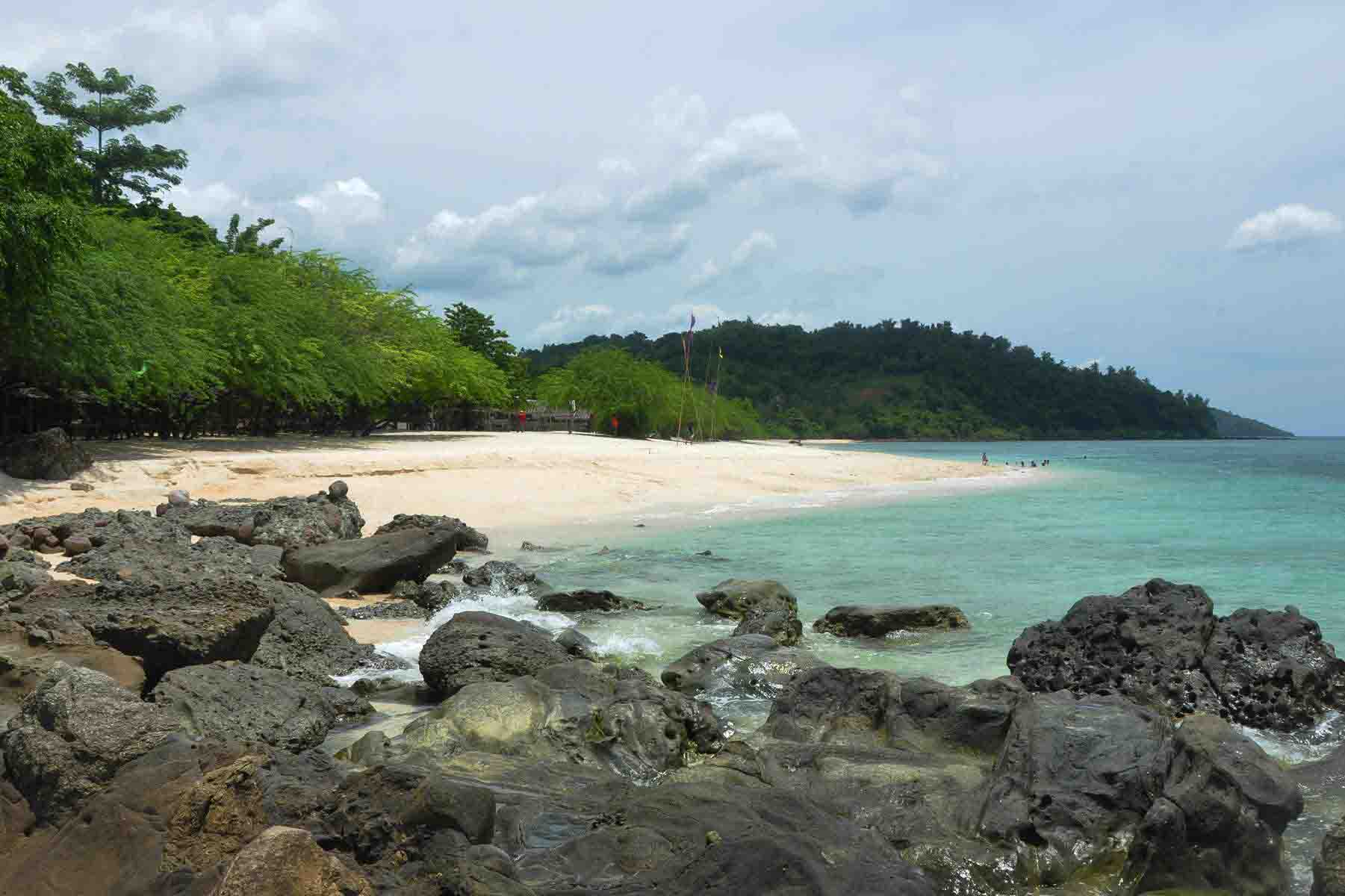 Buktot Beach gets its name from the word "buktot", which means "hunchback" in Hiligaynon. The shores of Buktot Beach plunges gradually into the sea, like that of a hunchback. The beach has coarse, cream-colored sand, with thorny aroma trees lining the shore. Both ends of the beach have sharp, jagged rocks extending into the sea. Buktot Beach has about 12 cottages for rent and a designated cooking area. Visitors are advised to bring their own charcoal should they plan to grill their food. They can also rent outrigger boats, and paddle to nearby beaches. Backpackers can freely set up their tents for overnight stay at the beach. Right across the stretch of deep sea is Buyayao Island, 30-minutes away by boat. 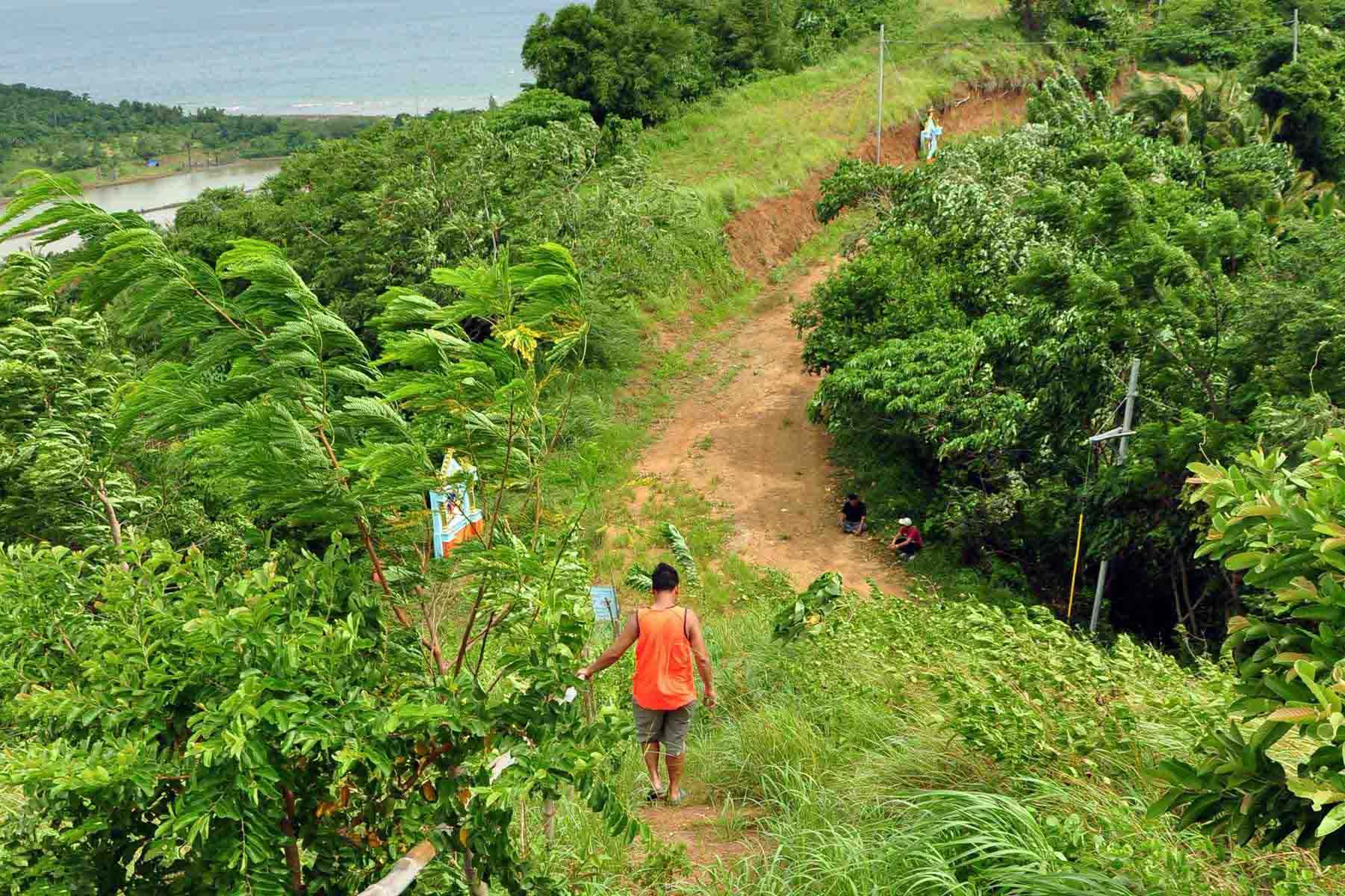 Mansalay Ecopark rests on the hills of Barangay B. del Mundo, overlooking the lowlands and the sea (Tablas Strait). While the ecopark's development have stopped abruptly, you may still visit the place for its 360-degree views and breezy atmosphere. Other than these, the ecopark serves as a pilgrimage site during Holy Week. Fourteen Stations of the Cross are erected along the dirt road going to the two view decks of Mansalay Ecopark. The first view deck is located right after the Stations, while the second is located at the next hill, with a telecommunications tower as its landmark. Thus, you may opt to trek from the Stations to the view decks (1.5 hours), or simply ride a motorcycle going straight to the second view deck itself. 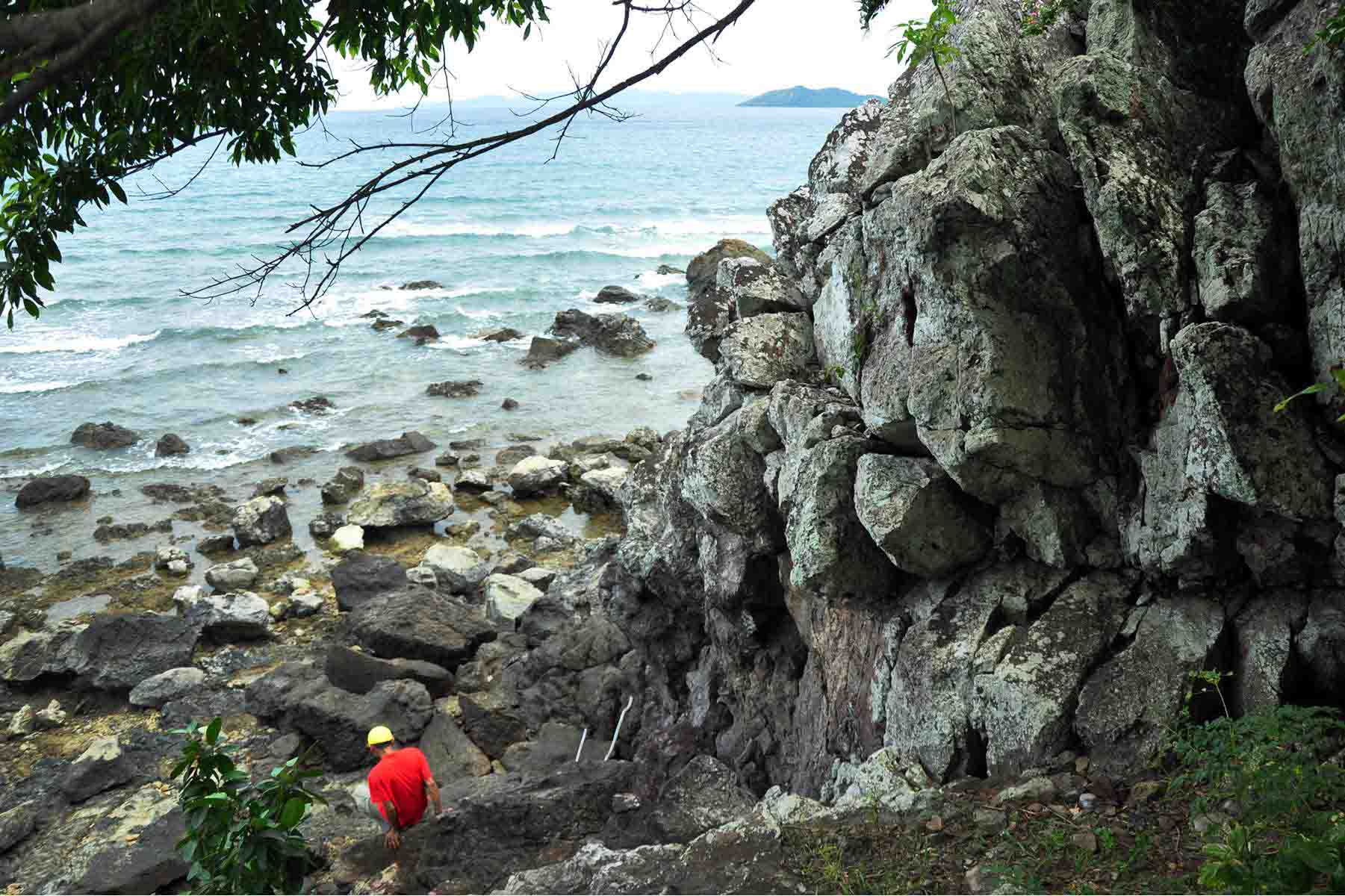 Palaypay Burial Ground is a rocky islet in the middle of a mangrove farm. It is where Mangyans permanently store the remains of their departed, after burying them for nine months to a year in their backyard. The ritual of digging out the remains from their backyard and transferring them to a cave is called "pangutkutan". At the middle of the islet is a nipa hut, which serves as a station for coast guards. The cave where the bones are kept is found behind this hut. The cave is known to house the skeletal remains of about a hundred Mangyans. However, 2010 police reports indicate rampant theft of the remains. Today, only a few scattered bones could be seen in the cave. Palaypay Burial Ground is about 100 meters away from the coast, and can only be reached by foot during low tide. 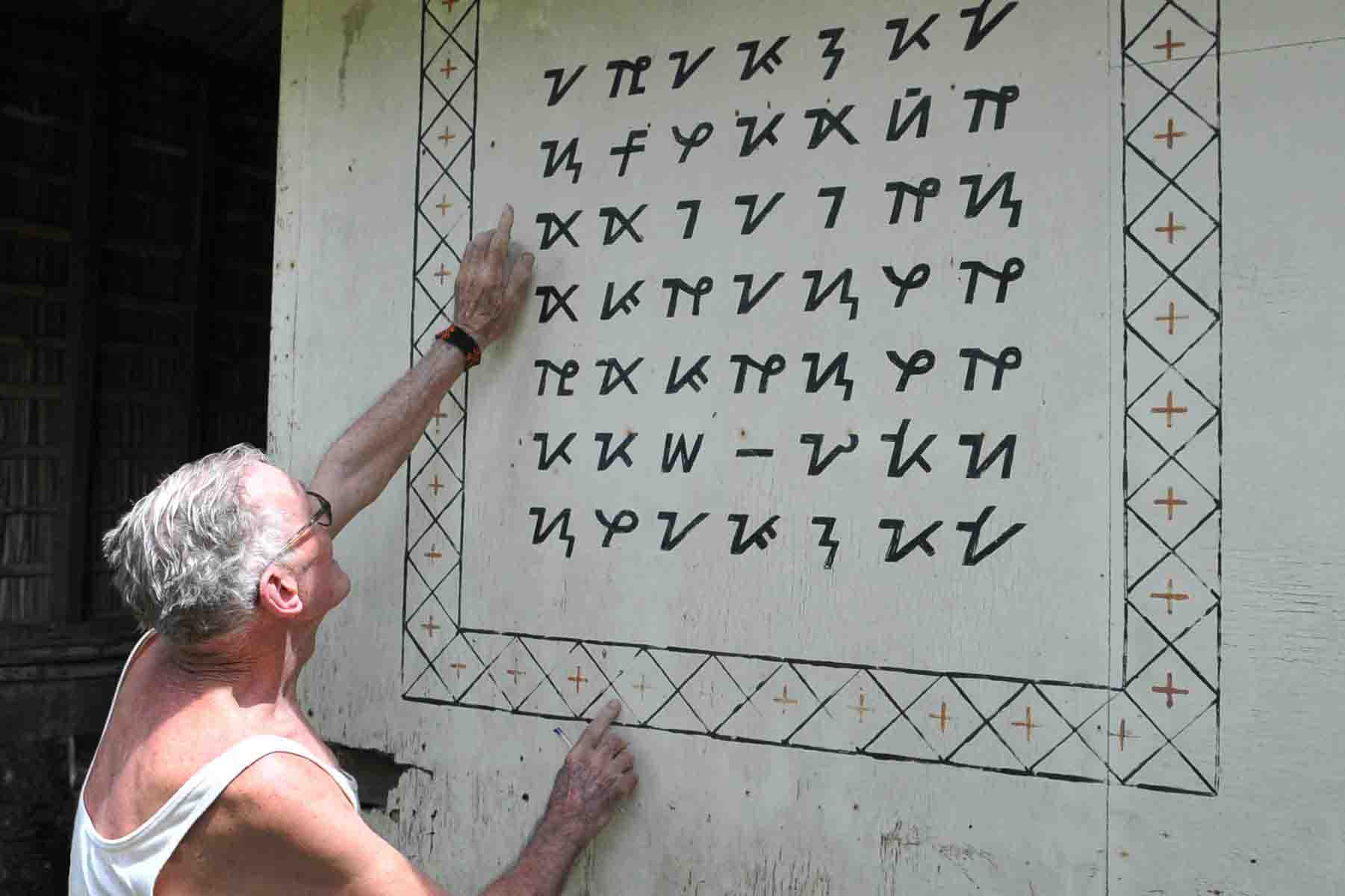 Panaytayan Mangyan Settlement was developed into a tourist-friendly community by Antoon Postma. A notable Dutch anthropologist and paleographer, Postma has been living with the Mangyans since 1965. Postma, considered one of the experts in deciphering ancient script in Asia, and his Mangyan wife, Yam Ay, work together towards promoting and conserving the rich Mangyan heritage. Panaytayan Mangyan Settlement is an upland Mangyan community that is home to an estimated 500 Mangyan residents. With the help of Antoon Postma, the community has become focused on education, particularly on the preservation of the Hanunuo script and language. Visiting the settlement, you'll find a primary school, a chapel, a basketball court, houses made of nipa, and a small hut that serves as the community's receiving area. 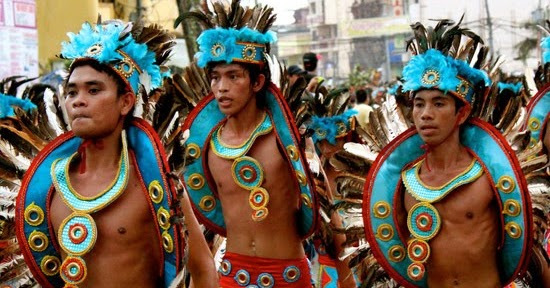 Locals of Mansalay, Mindoro Oriental celebrates every October 17-23 the "Pamugu-an Festival." It is a festive reunion of different “Mangyan” tribes. There are sports events (Palaro ng Lahi), cultural presentations, product demonstrations and “Barakalan” or “baratillo” of native products.