Officially the Municipality of Magsaysay, is a 3rd class municipality in the province of Occidental Mindoro, Philippines. According to the 2015 census, it has a population of 36,016 people.

Magsaysay is politically subdivided into 12 barangays, one of which is classified urban and the rest are rural. Five barangays of the municipality are coastal barangays.

DURING THE SPANISH AND AMERICAN REGIME

Caguray was mentioned in the report of a Jesuit missionary to the head of his congregation in 1666.  The missionary reported that he baptized many adults in the villages of Cagulay and Ililin.

Sta. Teresa was again mentioned in the history written by Antoon Postma, a Dutch researcher and historian, who wrote that the missionary who was assigned in this place in 1912 was Fr. Bernabe Peña Reta dela Imaculada Concepcion.  The said missionary was also celebrating mass in the chapel of Toong.  During that time, Toong was the center of La Hacienda de San Jose, the vast agricultural land in Occidental Mindoro which was entrusted for development by the Spanish government to the Order of Augustinian Recollects.

It could be mentioned here that the land within the municipality of Magsaysay at present could be divided into three sections during that time.  The first section was the La Hacienda of the Augustinian Recollect missionaries.  The second section was the private land which was the property of Felix Lopez, a well off individual living in another province.  The third section was the public land owned by the government.

A great part of La Hacienda and the land owned by Mr. Felix Lopez was utilized as pastureland.  Only a small part was planted with various plants, including coconut and vegetables.  When Mr. Lopez sold his land to Yu Kee Tay and Mrs. Richelle Kelly Dewalt, the two businessmen widened the area planted with vegetables.  During that time, a small launch used to enter the mouth of Caguray River where the vegetables harvested by the two businessmen and the Spanish friars were being loaded and transported to Manila.  The said launch was used to deliver the merchandise in the grocery of Sebastian Dylo, a Chinese merchant who was living at Brgy. Caguray.

In 1920, in the report sent by Fr. Julian Duval, chaplain of Mindoro Sugar Company and acting parish priest of St. Joseph Parush-Central to Bishop Alfredo Verzosa of Lipa, Batangas, he narrated his visit to Barrio Sta. Teresa on January 5, 1920.  He said that there were twelve houses and a chapel made of lumber and nipa in the barrio.  He mentioned that former laborers of Mindoro Sugar Company of Central decided to live in Sta. Teresa.

Fr. Duval also narrated that on January 6, 1920 he visited Caguray.  There were thirty houses in the barrio and the leader of the inhabitants was Capitan Eduardo Lualhati.  The missionary wrote to his superior that among the words engraved in the bell installed by a Spanish missionary in the chapel were the words Año 1896

The old residents of Caguray still remember that a convent for the priest was built in Sitio Toong.  According to them, a certain missionary priest popularly called Fr. Isidro died in the said sitio and was buried there.

Before the outbreak of World War II, the hacienda owned by Mrs. Dewalt was sold to Yu Kee Tay of Yutivo & Sons Corporation.  Old timers of the indigenous people belonging to the Hanunoo tribe said that in a portion of the hacienda called Bagaas, the site of Poblacion, Magsaysay today, big hogs were raised by the workers of the said corporation.

During that period, families of fishermen from the islands of Agutaya, Palawan and Panay settled in Alibog.[8]  Later on, the settlement became a barrio.  Farmers from the island of Lubang who were looking for land to till also came and settled in this place.  Some of them decided to settle permanently in the sitios of Laste, Panaga and Bulo.

Other inhabitants of Sta. Teresa and Caguray transferred to vacant lands near the mountains and cleared the forested areas there.  As years passed, the sitios of Paclolo, Purnaga and Lourdes appeared.  Among the families who transferred to Lourdes was the family of Nazario Dimailig, a farmer from Batangas.  He first settled in Caguray but since he was able to acquire a farm in Lourdes, he transferred to this place and stayed here permanently.  He served as teniente del barrio of Lourdes and the first vice mayor of the municipality of Magsaysay.

Aside from farming, logging was another source of income of the pioneers of Magsaysay.  The logs were converted into traviesa or railroad ties and raja or firewood.  Hard wood whish were converted into railroad ties came from the mountains of Alibog, while firewood came from the mangrove trees which abound in the swamps of Laste, Sibalat, Sta. Teresa, Caguray, Sitio Toong and Sitio Talaba. 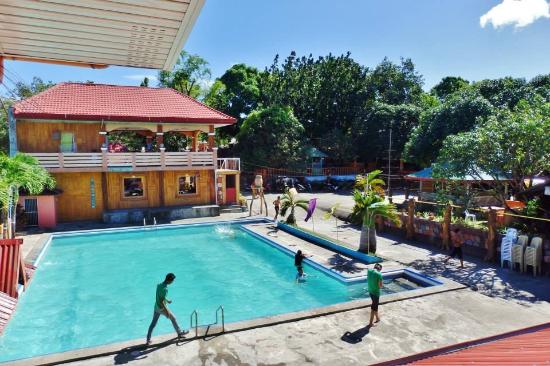